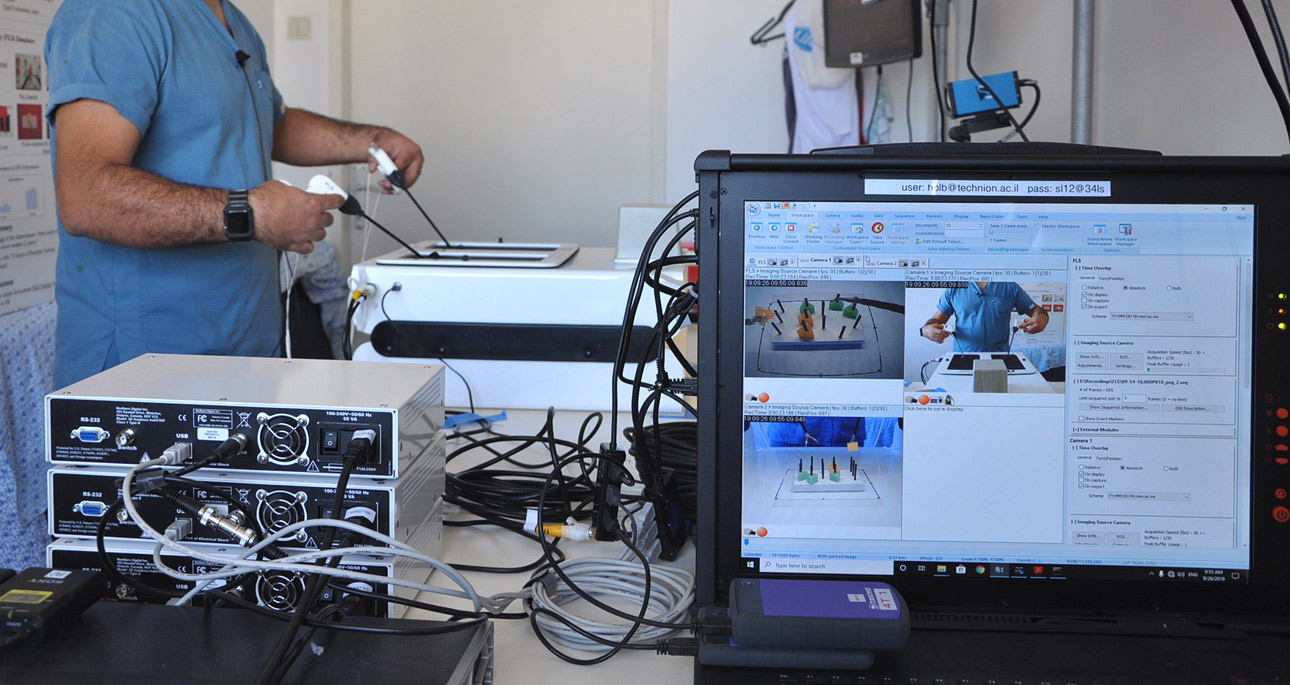 The single stitch intra-corporal task is a part of the FLS training. In this task the surgeons need to place a needle between two black dots, placed on a penrose drain, and tie three knots within the FLS box and finally cut the stitch with scissors.

In this work we recorded surgeons who performed the single stitch intra-corporal task, and with Deep Learning based Computer Vision algorithms we analyze the videos and provide feedback based on the observed procedure. The feedback can contain information regarding the way the surgeon holds the needle, how the needle is penetrating the penrose and and the quality of the knots.

The automatic feedback will allow residents to practice on their own without the need for a supervising human expert. 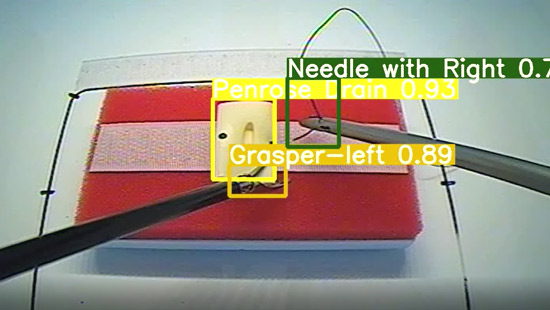 An example of a prediction of our neural network object detector.
The image is a frame from a recording of a doctor performing the single stitch intra-corporal task. 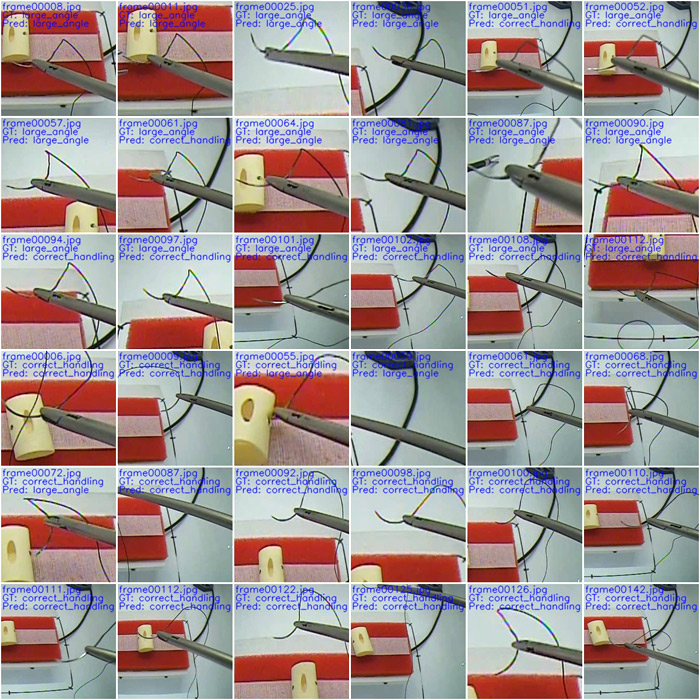 An example of predictions of a deep learning model that predicts the way the doctor holds the needle. 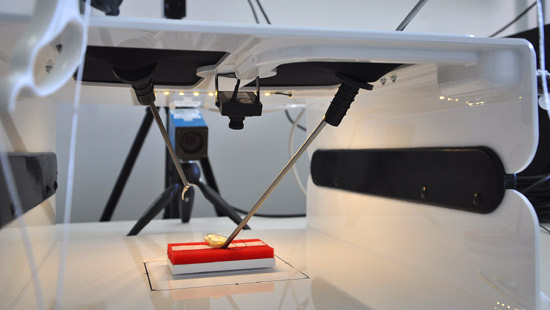 The FLS box with the single stitch intra-corporal equipment. The knots are tied within this box.

The task of “Peg Transfer” is part of the FLS training, and in this task doctors move objects one by one from one side of the board to the other and back, while both hands operate. Their performance is evaluated by the time it took them to complete the task.

In this work we recorded surgeons who performed the task of “Peg Transfer”, and with Deep Learning based Computer Vision algorithms we analyze the videos and provide the doctors with meaningful feedback. The feedback can give them information about whether they hold the triangle correctly, whether they move the instruments efficiently and so on. The feedback will allow the surgeons to improve on their own. 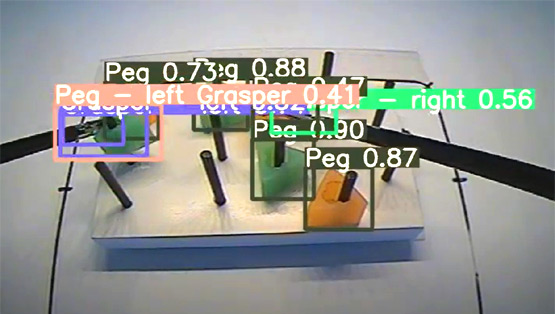 A frame from a video of a doctor performing the task. We used a neural network to detect the objects in the frame.

The positions of the two graspers (left and right) at each second of the video.

The average velocity of each hand per second. As you can see, there is not a noticable difference between hands in terms of speed. 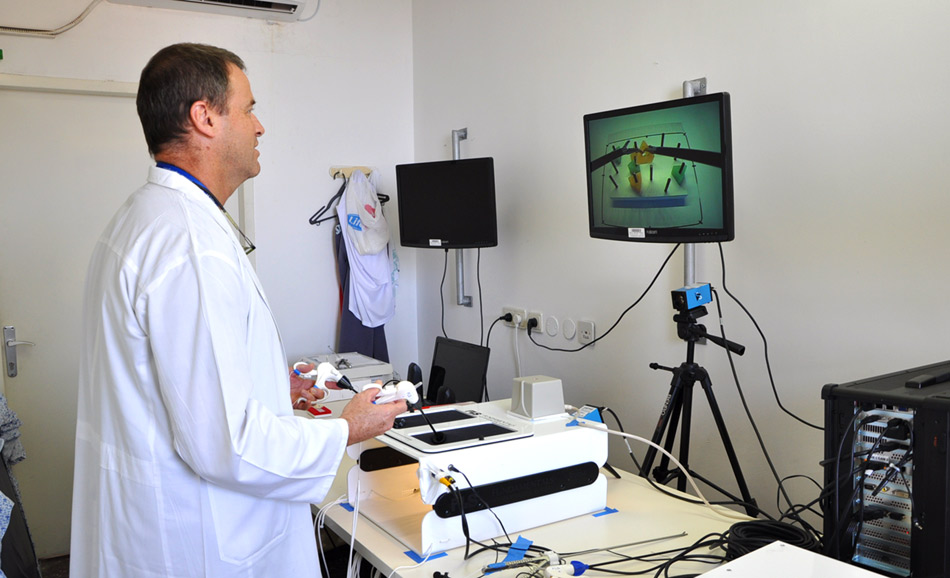 In the video we can see a surgeon performing the task of peg transfer. The surgeon must move every triangle from the pegs, from the left to the right as fast as they can, and then from the right to the left.

For example, when moving a triangle from the left, the surgeon must first pick it up with the left hand, move it to the right hand and finally put it down on a peg on the right side. While the task is performed, we examine if the surgeon holds the triangles correctly, do not drop them along the way, keep the free hand in place while the other transfers the triangle and so on. 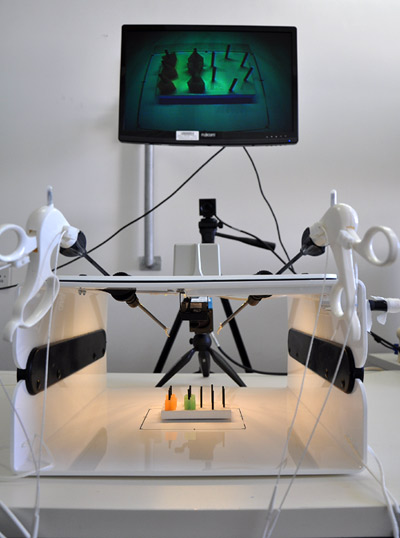 back to all research areas